Start a Wiki
WELCOME TO THE FORAGER WIKI

Forager is a 2D open world game inspired by exploration, farming and crafting games such as Stardew Valley, Terraria & Zelda.
Explore, craft, gather & manage resources, find secrets and build your base out of nothing! Buy land to explore and expand! The game is for PC, Nintendo Switch, PS4, And Xbox one.

The game is being developed by HopFrog and the game was officially released April 18, 2019.

HopFrog announced on Twitter the Forager Update Roadmap for 2019. 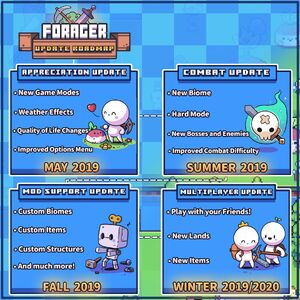